The production company had done a lot of the hard work for us, thanks to specific naming conventions and a fairly good workflow. Cantemo helped centralise the workflow, including additional aspects we added during this project. The biggest challenge was the sheer volume of content.

Note: Due to company policy, the customer profiled in this case study requested that they be kept anonymous.

A South Africa-based, award-winning producer of high-end factual series, has implemented Cantemo Portal™. Its content is disseminated across multiple platforms, including television networks, video and DVD, the Internet, and mobile phones, and it has rapidly become one of the most respected and innovative factual producers in the market.

Due to an ever-increasing catalogue of video assets, the producer was looking for a solution to give it greater control and automation of its existing workflow, assets, and storage. It approached Rocket Science, a rich media consultancy based in Johannesburg to help find a solution to streamlining that workflow.

The company was previously using using Final Cut Server for its workflow and Xsan for storage, and had actually already adopted some good practices in terms of its workflow. Therefore, with good specific naming conventions already in place and a well-organised workflow, some of that hard work had already been achieved before the project even began. Rocket Science was able to review those existing workflows, however, and make a number of recommendations as to how it could be altered and improved to bring in additional aspects and functionality.

Following that review, it was apparent that the current system did not give the company enough control and automation of its workflow and storage, and management of its individual assets. Cantemo was brought in to centralise the entire chain, giving it that much needed control and making the application of additional processes and automated workflows both easy and efficient.

Having suffered a burst water main, which put extra pressure on an already outdated, end-of-life system, WNMU was looking to overhaul its entire system. The resulting power outage severely disabled the station, so WNMU was clear it needed a modular approach to build in valuable redundancy and make replacing individual components much easier.

By far the biggest challenge was the sheer volume of content to be transitioned to the new system, with 125,000 assets in Final Cut Server, all of which had to be transcoded and relinked in the new system. Added to that, were the several thousand assets in storage, which had not yet been ingested. Using the Moosystems Final Cut Server CP Migration tool, Rocket Science was able to ensure all of the data was transitioned with the correct metadata. Once imported into Cantemo Portal, the data paths were remapped to the newly configured optimised SAN volume.

The process of importing so many pre-existing asset records took roughly two days, and once complete, the Cantemo system started generating the proxy media for all of those records.

With a large number of assets on tape, Rocket Science installed a 24 slot dual drive LTO6 tape library so that those videos could also be added into Cantemo Portal. At the time of ingestion, metadata is added to each asset, to ensure that the team can locate the right file and make any necessary edits.

The entire catalogue of video assets is displayed in Cantemo’s intuitive user interface, making it easy for any member of the team to navigate, find, share, and edit individual videos. 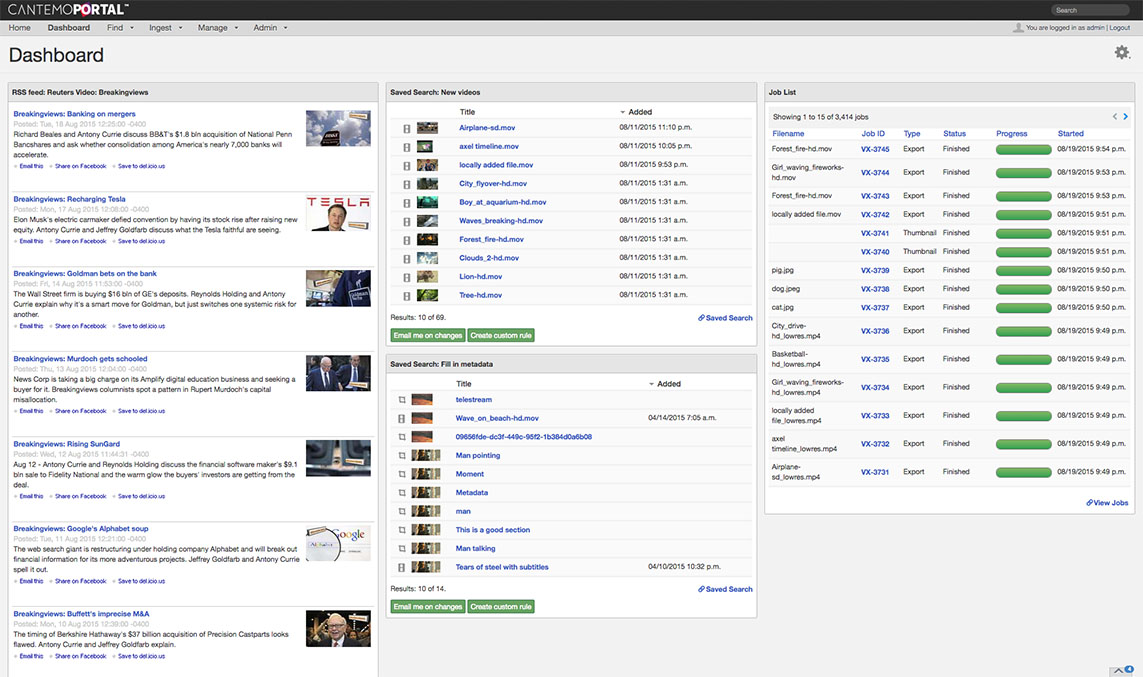 With so many videos already in existence, and many more being created on an ongoing basis, having an automated archiving system in place was an important part of this project. Integrating the CP Archive App from Moosystems meant that an automated process could be setup within Cantemo to archive assets directly to Archiware.

The other important aspect was having a future-proof storage system, able to accommodate an ever-growing catalogue. Rocket Science introduced 2nd and 3rd tier storage for nearline and archive functions respectively. The existing Xsan environment was migrated to a BrightDrive optimised Stornext appliance, which ensures optimised data and improved performance and life of the SAN. The existing Promise Vtrak arrays were repurposed and optimised for 160TB volume, giving much more storage capability. At the same time, a new nearline volume of 140TB accommodates the moving of assets from ingest to online.

Cantemo Portal means that the production company is able to centralise all of its video assets in one place. By integrating with third party applications and solutions, the workflow is now fully-automated, ensuring assets are fed into storage at the right time in the lifecycle.

The production company has a wide array of engaging and compelling factual content, which is delivered across multiple platforms. With such a vast catalogue and different delivery mechanisms, Cantemo Portal has enabled it to centralise everything in one place and establish automated workflows, which ultimately saves them time and resources.

Based in Johannesburg, South Africa, Rocket Science is a specialised consultancy team that has a passion working with "rich media". We are experts in vertical segments that include system integration, networking and storage. Combining this knowledge with a thorough understanding of media workflows and equipment, we have the perspective to implement solutions that integrate the technology and creative aspects of content creation and management. We pride ourselves in understanding the business objectives of our clients and helping them to see the opportunities our solutions offer them.